Derrick Jaxn and What this is NOT about: HER 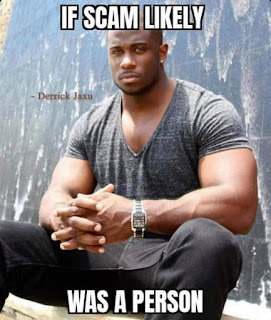 This past weekend was a Fkboi holiday. Derrick Jaxn, emperor of telling ladies to value themselves and leave the Fkboi collective was caught cheating on his wife. The celebration was rife throughout social media.

Memes and posts ensued from men and women alike who orgasmed off the shire hypocrisy of it all. The thing about Derrick Jaxn is that he did much more than encourage women to value themselves and not settle for less than they deserve in a relationship.

He demonized black men in a way that felt deep and personal. He didn’t provide the space for nuisance, context, or the fact that life is messy and sometimes people (including and especially black men) are allowed to make mistakes and have second chances. He provided an extremely narrow and nearly impossible view of what it took to be a “good” black man worthy of YOU, a Black queen.

It is for this reason, that so many were turned off by what we now know is his false internet persona. Nevertheless, the celebration of his downfall online while warranted is a bit much. It’s the kind of ‘getcha gotcha’ that if for no other reason, he should have never let his haters have. But this piece isn’t about him. It’s about what this whole situation isn’t about: Her.

While the memes online originated drawing clear and hilarious contradictions between his harmful rhetoric and his behavior. It has taken, as many things do, a turn misogynistic turn. It starts out playful with people poking fun at the bonnet his wife worn in the apology video the two of them recorded together. To the more hurtful, replacing a picture of her face with the iconic crying Kerry Washington face.

To comments online, of women stating they would rather paint a house with nail polish before they let their man embarrass them like that on video. But here's that thing we do, we make it about her and it's wrong. “She LET him cheat.” “She LET him embarrass her.” “Girl, can you believe she stayed with his raggedy-ass?” But here’s a reminder.

She didn’t let him do anything and that’s where we get it twisted in relationships. The definition of a relationship is the way in which two or more concepts, objects, or people are connected. CONNECTED. Not controlled or not owned.

Derrick is responsible for his own behavior no matter what she does. He is an adult male who given his free will, made his own choices. Her behavior could contribute, support, encourage and help but at the end of the day, he did this and frankly, we should leave her out of it.

These are the subtle ways we undermine women and their agency. It’s her life, not ours and if she wants to sit on live with a bonnet holding this man’s hand, she’s entitled to do that. She might watch it tomorrow and decided to leave him all together. Whatever she decides it will be her choice.

So, while the Fkboi’s finish up their celebratory toasts. The rest of us can do better. Most of us have seen through Derrick Jaxn for a while now. We knew he was a gimmick and listened to him with a grain of salt knowing his pander was just words he thought we wanted to hear.

We didn’t make our relationship decisions based on his gospel and found our self-worth in ourselves rather than ANOTHER man telling us what we NEED to do. Seriously, guys, we are really sick of you telling us what to do to keep a man. Please stop. As for his wife, leave her out of it. This isn’t about her. This is a story of another man falling far and hard from the pedestal he built for himself. Cheers!