While Bridgerton is one of the most well-written Shondaland productions in the history of Shondaland. I find myself placed in a less favorable sentiment. Logic. While the fantasy of the series creates superficial realities where old England is far more progressive than its present version, I struggle with the way in which the season places fantasies back into the lap of women.

I think it took women and young girls years to get out from under the thumbs of fairy tales but here we are, believing that love matches can be made in a matter of days and passion can keep a life of longevity in a marriage. 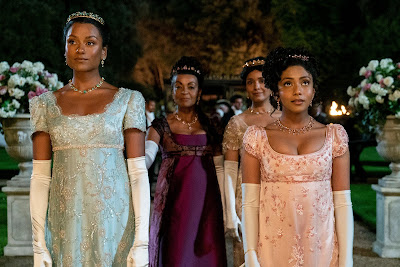 I will say that there’s a reason why women can’t escape the fondness for passionate romance. Hollywood has made millions of dollars off of it. But is it something we as humans can attain? Or is it merely just something that allows us to remember when he didn’t fart as much, and he actually wanted to know truly what our interests were?

Can love sustain the levels of passion that are commonplace in period pieces and rom coms? Or is the sustainability of love a lot more mundane and practical? What defines romance when a marriage or relationship extends beyond the love fog some would say is communication, a semi-active sex life, and good ole fashion grit.

But that’s not what’s heavily apparent in romance films and series, what does remain is bold declarations in the rain and a fast-forward to built families, lovely clean children, and an even faster montage of a couple resting in their old age on porches.

We get it, long gazes turn into, the perfect combination of gentle and rough sex, which turns into marriage and childbirth, which then begets the happiest of endings.

We've seen this before. About 85 million times already.

However, enjoy the show, and live in that good ole fashion whimsy, it's a great destination for your mind. Especially in a world full of increased interest rates, the potentiality of world wars, celebrity chaos, and TRAUMA. We all need a mental vacation.

It's Not Love, it's Love Adjacent

March 13, 2018
It’s my thought that the heart and the mind take turns in sharing authority in how we pattern our personal decisions. They cannot both be in control at the same time, and I believe that there’s a celestial straw pulling to determine which will rule within each given moment. The dangerous part about this is, sometimes when the heart wins, we forget to use our brain . When this happens, we start making decisions that are completely passion driven, hunger driven, and backed behind a receptor that shouldn’t receive as much showtime as it’s getting. Sometimes you fall in love with someone that is all wrong for you. They don’t feed you spiritually, they don’t feed you mentally, and maybe they don’t respect you. But they have ONE or two things on our list, so we keep them around. But by osmosis, all the signs that you saw in the beginning appear a bit less obvious, and now you THINK you love this person. Your heart is in control and your brain is taking a break, your brain has
Post a Comment
Read more