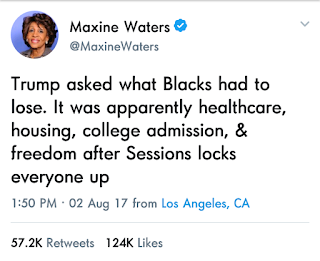 Throwback Post (I was going through my old posts that weren't posted during election season and found this gem! I thought now would be a great time to post it because Auntie Maxine Waters had an answer to Trumps call to action for African American voters! Check it out! )

Donald Trump really wants the African American vote in the November election. He is currently pulling out all the stops, we have seen him speak at African American Universities, held press conferences in our communities, spoken to us directly, and carved out a comprehensive plan to dissuade * African Americans to leave the democratic party. A party in which African Americans have widely supported for about 50 years. He is familiar with the African Diaspora and knows that we are in urgent need of respect, reform, and empathy for the many struggles that we face both systematically and publicly. Finally, a candidate that gets us! What I just did there, that was shade. Unfortunately, everything I just said was a lie. Except for one thing. Donald Trump's support from African American voters on the high end, billows in at about 1%. So he would probably like our vote. So while at a campaign stop in Dimondale, Michigan last Friday, he made sure to address us, in front of a predominantly white audience with these words. "The only way to change results is to change leadership. We can never fix our problems by relying on the same politicians who created our problems in the first place. A new future requires brand new leadership," he said."Look at how much African American communities are suffering from Democratic control. To those I say the following: What do you have to lose by trying something new like Trump? What do you have to lose?" he asked. "You live in poverty, your schools are no good, you have no jobs, 58 percent of your youth is unemployed. What the hell do you have to lose?"Is it me or does this rhetoric sound similar to what someone would say in a doomsday sequence? Donald Trump is the last potential leader on earth, and the downtrodden African Americans need him to help deliver them from Armageddon. So there is really no need to finesse his way to our trust because hey, what else do we have?This tactic is rude at best and it is also unintelligible for a number of reasons. (I am sure that this statement was made off the cuff, and not directly from the teleprompter like his political strategist suggested.)  Firstly, all of the African American population is not poor. The numbers are somewhere around 26%, which albeit high, it's not as dismal as he states. Secondly the 59% jobless rate he is referring to is that of young African Americans between the ages of 16-19 are wrong. This age brackets jobless rate is actually 27.1%. The numbers for White American teen’s jobless rate is about 50% for the same age bracket. So we are not that far behind there either. Realistically speaking, the problems in the African American community that he spoke of during this rally aren't all fictitious. Detroit and Chicago and many other major cities do have high crime rates that need to be rectified immediately. The education system in African American populated communities are lackluster. However, Trump's only answer to these problems (to date) are to defame the other candidate and promise more jobs. How is it possible to increase more jobs by lowering taxes for wealthy businesses and their owners? Is he in on a secret that we are not in on? What is the purpose of bringing back the coal mining industry? Does anyone still actually know any coal miners? Please explain to the millions of Americans who do not understand their health insurance, why repealing Obamacare is a good idea? He has not given any reason for us or really any ethnic, gender or social group (not even white males) in America to pack our proverbial bags and move to support his candidacy.  The American people, specifically African Americans are passed the point where scare tactics and campaign promises are enough. Do Better Donald.(poverty by race linkhttp://kff.org/other/state-indicator/poverty-rate-by-raceethnicity/)
(Polling Percentage: https://www.washingtonpost.com/news/the-fix/wp/2016/07/13/new-polls-in-pennsylvania-and-ohio-show-donald-trump-with-0-percent-of-the-black-vote/?tid=a_inl)