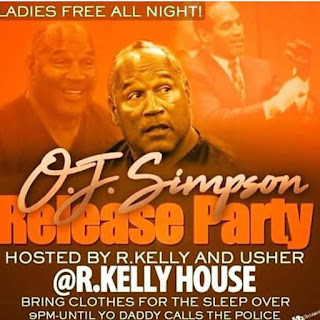 WEEK IN REVIEW :
This week in black media is similar to an NC-17 Tyler Perry movie. I just wonder if there will be an opportunity for a gospel solo by Tamela Mann at the end of it to make us all feel better.

If you have been un-bothered by social media and have no idea about this week's news I am soo happy to spill this tea all over your phone, laptop, or PC. I thank you in advance!

R.Kelly, Capt Pedophile is in the midst of yet another predatory scandal. ANOTHER ONE. This time he has been accused of running a sex cult of sorts in which sources have indicated that their daughters has been brainwashed.

That's the news. Here is the editorial.  R. Kelly is a sick SOB who at one point was a victim of sexual abuse. Since 95' this man has been preying on women and young girls to no avail and the behavior is getting worse. He is a sexual deviant he needs help. Immediately. He clearly has no checks and balances and the money hungry parents who allow their daughters to bed him; for the promise of commercial success, clearly do not have the wherewithal to protect their daughters. 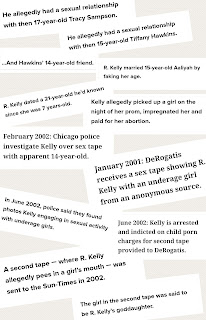 They only feel compelled to stop him when their daughters seem to have lost control of themselves and they see the man for who he is. Or a payday for what it is.. It may sound like I am judging the parents more harshly than  the victims and R.Kelly.  Maybe I am. As this story unfolds I will write more.

This is the part of the Tyler Perry movies when the good guy turns out to be..not what you expected…

Tuesday released video of Kevin Hart in his car outside of a hotel canoodling with some woman.. While his wife was pregnant and.. Not there. Social media was outdone, I was not. Kevin Hart seems like the type of guy who wants what he wants. Takes it and considers the consequences AFTER he gets caught up. I can imagine him going home and providing a DEERBRA worthy tall tale about how the video was not what it looks like.

Secondly it has been rumored that Kevin Hart met his second wife while married to Torrei Hart. I wouldn't doubt it. No proof on that though, however according to the timeline in which his relationship and the divorce occurred, Eniko Parrish was there while some of it went down. If that is the case than this is simply a karma situation for that doe eyed pregnant wife he has. (DISCLAIMER- THIS DOES NOT EXCUSE HIS BEHAVIOR. IF HE DID SOMETHING WRONG.)

I think it's important for a person to take some time to examine their wrong doing at the end of a divorce to make sure that you don't continue to make the same mistakes. Kevin was too busy building a comedic empire to really do that I guess? Bottom line I saw this coming.

This is the part of the Tyler Perry movie that leaves us jamming popcorn down our throats and forgetting to breathe. This is the cliff hanger.

My favorite modern day R&B singer Usher’s skeletons fell all the way out of the closet this week. No he is not GAY. He hasn't been caught cheating on his manager wife Grace Miguel. Apparently some court documents were leaked that concluded Usher has HERPES and he gave it to a woman who was a bridesmaid in his first wedding. These documents were filed in 2012 which means Usher has been carrying this secret for YEARS. I mean why wouldn't he? It's his business. How did he keep it quiet? Well he paid the woman in a settlement for 1.1 million dollars to shut up. 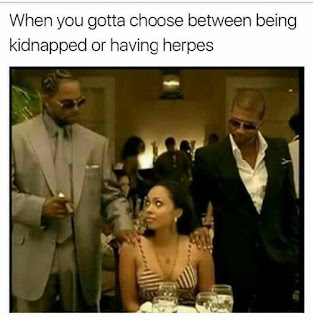 Just to give you an implication how traumatic this week was, CHRIS BROWN posted a video on twitter utter disbelief and oh so happy it wasn't him.

Here is the cookout portion of the Tyler Perry movie when somehow through all the drama and mind numbing torture the old heads come together and provide us with a lighter moment.


OJ GOT PAROLED. OJ who was sentenced to 30 years in prison. Not for murder, he was convicted of robbery. OJ has spent the last 9 years in prison and on Thursday, his live steam parole hearing aired. The parole review board approved his release. Queue the Frankie Beverly!


The funny thing is.. If this wasn't such a newsworthy week this would have been bad news. I was kinda like well.. He is 70 years old. So why not. He technically isn't a murderer and 30 years for stealing YOUR memorabilia is a bit much. P.S. the meme extravaganza via black twitter this week has been the highlight of all the hoopla. We can find humor in everything!!

For my Jerry Springer Final thought:
It is important that we do not judge others for the missteps they make in life. You never know when you can be the one being dragged through the mud via social media. However, it's also important to know what a predator looks like, and how to use a condom. Have a wonderful weekend!  Capt SistaGurl Out! 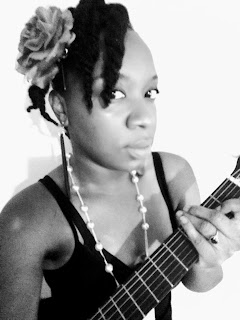