Is it time to quit your job?

June 07, 2017
I worked at a company once, where the Director of Operations, was holding a meeting about Employee Engagement. This lady was a straight shooting, hard nosed go getter. She never tailored her pep talks to the meek. In the meeting she firmly said, “Engagement is your own personal responsibility. Although managers can improve your environment, you control your feelings towards your efforts and your work”.


At first I thought she was passing the buck a bit. At the time I had tyrant manager, and all of my visions of pushing her out of a window couldn’t possibly be misplaced, this was all her doing. Then I thought about it, if my own happiness is my responsibility, than she must be right. I was allowing my work environment to control my life.


It took far to long for me to understand how far to the end of despair.  I sought another opportunity with a giant boost in pay, that pushed me into a bigger DUNGEON of despair. I know what you’re thinking. How is that possible? You left the bad manager, you were making more money, why didn’t it work? Here are a couple of reasons why:

I have always been a direct, assertive, and efficient team player. You know, all those things that employers love for you to be? I took the assignments that no one wanted, I worked overtime, I worked fast, I was always an ideal candidate. For all you sports fans, I was the ONE SHOT BOB of employees (Robert Horry)!!!


Then one day.. I wasn’t the fastest employee, I wasn’t working ANYMORE over time, I spent more time day dreaming than I did working, and I made more mistakes. I was tired. My then new manager noticed and called me out on it. So I began to LOATHE her. She didn't let up. I missed more workdays, I was looking more like a has been than the star player. Did I mention I was PREGNANT???


It has been proven that hating your job can even lower your immune system. So when you think that you are faking and calling in sick; you probably are somewhere in between depression and REALLY SICK. Sick of your life!


My initial goal for promotional role I mentioned, was to improve my skill set, take the advancement opportunities that I could, and move on.. I had a specific career path and while I worked within it, I was not satisfied.


Somewhere between 20 and 40 percent of Americans hate their jobs! Can you imagine how many of us are walking around virtually miserable!?!?

I have always been a creative person, first a musician, then a designer, and now a writer. However, at that time I wasn't doing any of that. For the sake of my family I tried to compete and thrive in an environment that I really didn't want to be in.


Then I realized what was wrong. The sacrifice I made to not pursue my passions jeopardized my family more than the commitment I chose to make. It was at that moment when I chose to free myself of the SELF INFLICTED shackles I had put on myself. I left the high paying job and quickly began to reevaluate (didn't have much choice). Why? They fired my fantastic ass!


A few months ago, I took an interview with Sherri Shepherd as she was on a promotional tour for her recent projects. I was delighted to see her, and prior to meeting I read that before her big break she worked as a legal secretary. After her first big break fizzled out, she went back to her job as a legal secretary. The irony of all this was, I never asked her any questions about her past in relation to this. However, as the interview came to a close, she hugged me and asked me. 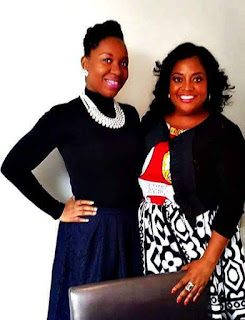 “When are you going to take a step out on faith? You can do this!“ Sherri not knowing me for longer than 11 minutes, saw right through me, and sensed my challenges. How serendipitous was that?


I still work and assist in supporting my family; but I carve out time to build my CAREER as well. One that I spend late nights working on. One that even if there isn't a computer present I write on my phone. It is worth it. It is my passion.
Of course there are people who believe that I should spend more time home with my kids/husband, or less time networking. Someone even  told me I was TOO OLD for a career change. At the time I was 32.


None of these people cared that I practically became a zombie when I was working 16 hrs days, and feeding my depression with food and caffeine. They thought I had succeeded because I was living in the ideal of their success. Not my own.


So yes, there will be people in your life that believe you should move along a linear path. The silver lining is sometimes, you will meet someone that can see you for who you really are. To help motivate you to become the person you were destined to be!


Everyone has a passion. It may not be creative, it could be a vision of feeding the homeless full-time or becoming a personal shopper. Truthfully speaking, the (INSERT ROLE) that you are busting your ass over,  isn’t going to help you attain that.

It doesn’t have to be so drastic where you drop everything, and quit your job without a fall back plan. (I actually do not advise that). It is urgent for you to seek your own version of wellness. That should be taken care of sooner than later.


My story may not fit everyone. A lot of times the employment fix can be as simple as finding a new employer or changing the role that you are working in. It does require some clear thought and carefully planning. There might even be a need to seek counseling to determine if the turmoil you are facing is really linked to your job. In the end, your life path and goals are just as important as your sanity.