Trump Who? Here's Why I Don't Give a Damn. 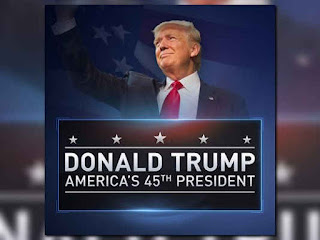 I know that we as a nation are on the heels of a presidency that was unfavored by over 50% of the voting population. I also know that we as a nation are going to wake up in mourning because the Obamas are leaving the white house. It sucks. There is really no right way to say it. We will miss them for who they are and what they stand for. We can also remember how every time Barack walked off of Air Force or stepped to the podium behind the presidential seal, dreams were no longer deferred. It is okay to grieve. Not for long, because quite frankly, there isn’t much time to do so.

The world is changing fast! Tomorrow what we knew about how the government worked could be a recent memory.. I am not here to fear monger, it is just the truth. Healthcare is changing, the stock markets are fluctuating, protests are looming and all throughout this process children are watching. Capt Twitter Fingers, The President of Scam University, Alleged Rapist, Mr. Pussy Grabber is going to be the 45th President of the United States. TOMORROW.

He is going to be boarding the same plane that the OBAMAS did, sleeping in the same bedroom, with just as much access to the military that he or any other president had. He is “our leader” now. (Excuse the vomit). I know everyone is saying,” Oh he is not my President.“ but guess what? Go visit another country after tomorrow and they will dispute your theory.. These are the undeniable facts.

So what do we do now? I have a few theories. Since it is also the same week as Martin Luther King Jr’s birthday, The Birth of Nation film was released this week, and Hidden Figures is number one in the box office; I can’t help but notice the symbiotic echoes of unity, change, and forward progression from our forefathers and former leaders.

We cannot give up. Our children (literally and figuratively in my case), still need our help. Our blood is still in the streets and our souls are still broken. We cannot, sit down and throw our hands up because an orange man is supposed to be our representation now. We have the tools be the change, to build our wealth, and to be our own leadership. More than we ever did, we can do this for ourselves.

We don’t have to to sit and be shocked. Shocked for what?? When are people are losing love for themselves? When our median average of annual salary is approximately $8k and $71k among White Americans. We have spent too much time being shocked and feeling sorry for ourselves. Try a new thing! Create, Inspire, be an example. Invest your money, stop buying takeout food, jewelry and shit we do not need. Feed the homeless. APOLOGIZE WHEN YOU ARE WRONG. Please. USE CONDOMS. Be a leader. Do not let the dried blood on the leaves of our ancestors and our children be in vain.

Truthfully, this has nothing to do with white people, or any other nationality for that matter. It has everything to do with us and what is urgent for our communities. No one will ever give us anything.

This is a call to action as much as it is a plea for my people to be great. BLACK is amazing. There is no limit to that and it is about time we stopped watching the world lap us.